Why should you deprive yourself of yumminess when losing or watching your weight? There's no need when you know how to snack clever! I've got 50 - yes 50 - great snacks here, all under 100 calories. Enjoy!

Three small figs stuffed with a tablespoon of part-skim ricotta and cinnamon. 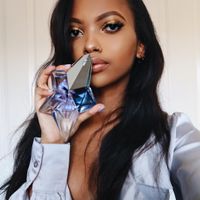 Pro Tips on How to Dress for Valentines Day ... 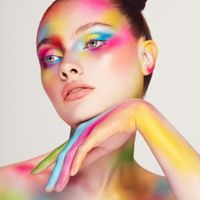 Serving Size: 1 cup grapes placed in the freezer for a couple of hours.

A couple of ¼-inch thick pineapple rounds, grilled for a couple of minutes.

Half cup of nonfat Greek yogurt with a teaspoon of honey and a dash of cinnamon.

A Fig Newton and a teaspoon of peanut butter.

2/3 cup of blueberries sprinkled with a tablespoon of slivered almonds.

Half ounce of chocolate.

¼ cup each of orange juice, pineapple juice, and apple juice with ice.

A small apple, cored and filled with a teaspoon of brown sugar and sprinkled with cinnamon, baked until tender.

A sliced large cucumber tossed with a couple of tablespoons of chopped red onion and 2 tsp of apple cider vinegar.

¼ cup of vanilla Greek yogurt, 1/3 cup of banana (sliced), and a handful of ice (blended).

A sliced banana (small) dipped in lemon juice and baked.

A toasted Kashi 7-Grain Waffle sprinkled with ¼ cup of mixed berries or strawberries.

Five animal crackers and half cup of skim milk.

2 Cups of air-popped popcorn with a tbsp of nutritional yeast.

Some cinnamon sprinkled on a teaspoon of peanut butter and 2 graham cracker squares.

2 roasted tomatoes sliced and sprinkled with Parmesan cheese and topped with 2 tbsp breadcrumbs.

A small sweet potato cooked in microwave for 6 minutes and mashed with a teaspoon of curry and salt and pepper for flavor.

Yolk removed from 1 halved hard-boiled egg and stuffed with 2 tbsp of guacamole.

Half English muffin with a couple of tbsp of cottage cheese and 3 slices of cucumber.

2 cups of raw kale without stems tossed with a teaspoon of olive oil and cooked at 400 degrees until crisp.

A small sweet potato, sliced, and tossed with a teaspoon of olive oil, and cooked at 400 degrees for 10 minutes.

An ounce of fresh mozzarella with 1/3 cup of cherry tomatoes and a couple of tsp of balsamic vinegar.

1/3 cup of boiled shelled edamame with a teaspoon of soy sauce.

2 slices of honey-baked ham with a couple of tsp of honey mustard and rolled in a lettuce leaf.

Half an apple sliced with half tbsp of natural peanut butter.

An ounce of lox with half bagel (whole wheat, no cream cheese).

Half a small melon and half cup cottage cheese (nonfat).

A medium celery stalk with a tbsp of peanut butter.

1½ tbsp raisins with a cup of shaved carrots and a tbsp of balsamic vinegar.

A brown rice cake with 2 tsp of almond butter.

2 tsp of maple syrup with 5 pecans roasted and a tsp of cinnamon.

A tbsp of crumbled blue cheese and 3 dried apricots.

Half cup cottage cheese (nonfat) with 1/4 cup each of pineapple and chopped mango.

A cup of sliced strawberries and two cups of raw spinach with a tbsp of balsamic vinegar.

⅓ cup chickpeas with a tbsp of sliced scallions, a squeeze of lemon juice, and ¼ cup of diced tomatoes.

3 egg whites with ½ cup of raw spinach and 1 tbsp of feta cheese.

2 tbsp of pumpkin seeds sprayed with oil and baked for 15 minutes (at 400 degrees) and sprinkled with kosher salt.

45 Grilled Garlic Corn on the Cob

A small corncob brushed with a tsp of each olive oil and sautéed minced garlic, and grilled until tender.

6 spears sprayed with olive oil and sprinkled with 2 tbsp of grated Parmesan cheese, and baked at 400 degrees for about 10 minutes

fashion
Pro Tips on How to Dress for Valentines Day ...
lifestyle
8 Things That Really Inspire Me ...
weightloss
7 Wonderful Ways to Amp up Your Workout ...
lifestyle
Dealing with the Devastation of a Friend Breakup ...
lifestyle
Panama canal political cartoon

How to wear hair down with baseball hat ...
How to grind while kissing ...
What do guys do when they hang out ...
How to take psyllium husk to lower cholesterol ...
What's good to drink when you have a hangover ...
What should you eat for breakfast to lose weight ...
How do you make a baja blast ...
Is banana on toast good for weight loss ...
How to eat psyllium ...
What color eyeliner for blue eyes ...