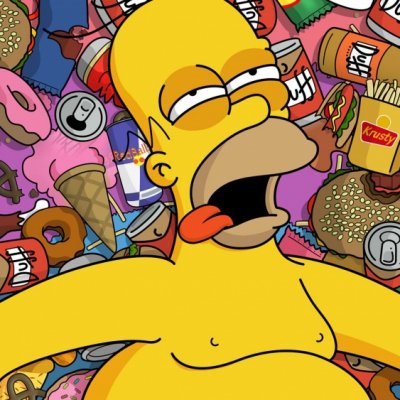 Going for a walk can be a useful distraction to stop yourself from eating out of boredom. Gentle exercise like this won't burn off too many calories and make you even hungrier. Just take a route that bypasses any shops selling food, or go out without any money, so that you won't be tempted to pick up a high-calorie snack on your walk!

People can often mistake thirst for hunger. Before reaching for a snack, drink a glass of water instead and wait a short while. You may find that the 'hunger pangs' disappear. Water is better than juice or soda, as it will hydrate you without adding any extra calories (regular soda-drinking can add a surprising number of calories over time).

It's also helpful to sit down to eat rather than grazing while standing. The problem with snacking while standing up is that you don't really see it as eating. You kid yourself that it's not a proper meal and the calories don't count. You can also not really notice how much you're eating. Stick to eating while sitting at a table, and you'll avoid adding pounds out of boredom.

People often eat out of boredom in order to have something to do with their hands. Try keeping yourself busy with crafts instead. When you're tempted to start snacking, pick up your crochet or cross-stitch instead. It'll keep your hands busy, and you'll end up with something to show for your time, rather than some excess pounds!

Work out why you eat out of boredom. Is it because you're watching programs you're not really interested in, or when you're stuck at home? Do you snack in your work breaks because you've nothing else to do? Try reading a book or newspaper instead, or going for a walk to pass the time.

Distraction, as with doing crafts, can work very well to stop you eating out of boredom. Give your hands something to do and start organising your closets, cupboards or desk. And if you tend to snack at your desk, don't stock up with snacks (unless it's something healthy like fruit). If you don't have it, you won't be tempted to eat it!

Always ask yourself if you're really hungry when you're tempted to snack. Snacking can often become a habit, and one which adds a lot of unnecessary calories. Also eat a proper meal, so that you're not hungry in between meals. What's your favorite way of amusing yourself when you get bored?